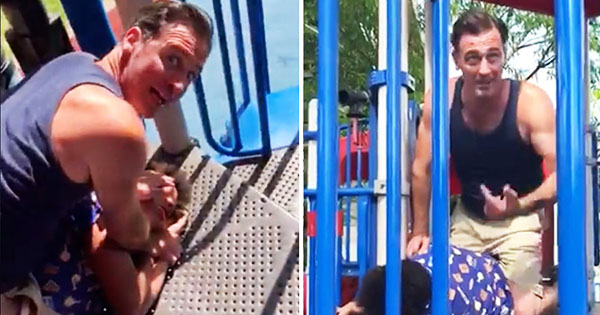 Pittsburgh, PA — Thomas D’Andrea, a 46-year old white man, has been charged for allegedly jumping on and assaulting a 13-year old Black boy because he thought he was vandalizing property at a playground in Greenfield, Pennsylvania. A cellphone video shows the young boy struggling under his restraint.

D’Andrea, a resident of Greenfield and a well-known neighborhood advocate, can be seen on the video pinning the boy while yelling expletives and racial slurs.

The boy’s sister, who was recording the video, can be heard begging the man to let go of her brother who has severe asthma and is bleeding from the mouth. D’Andrea refused until police arrived and ordered him to release him.

Apparently, D’Andrea saw the boy near an abandoned truck in the playground and assumed that he was vandalizing so he called the police. He confronted the boy and punched him but the boy punched back in self-defense. The situation then escalated and he decided to take the law into his own hands and brutalized the boy before the police came.

After reviewing the incident, police determined D’Andrea was the aggressor. He was charged with simple assault and criminal mischief, but he didn’t spend any time in jail. Moreover, D’Andrea, who is a city firefighter, has since been placed on administrative leave pending an investigation.