In novels including Beloved and The Bluest Eye, acclaimed author dramatized African-American experience with fierce passion 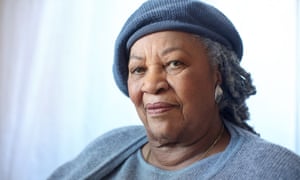 Toni Morrison, who chronicled the African American experience in fiction over five decades, has died aged 88.

In a statement on Tuesday, her family and publisher Knopf confirmed that the author died in Montefiore Medical Center in New York on Monday night after a short illness.

Born in an Ohio steel town in the depths of the Great Depression, Morrison carved out a literary home for the voices of African Americans, first as an acclaimed editor and then with novels such as The Bluest Eye, Song of Solomon and Beloved. Over the course of a career that garnered honours including the Pulitzer prize, the Nobel prize, the Légion d’Honneur and a Presidential Medal of Freedom presented to her in 2012 by her friend Barack Obama, her work became part of the fabric of American life as it was woven into high school syllabuses up and down the country. Read more
Share |
Posted by Lehigh Valley Black News Network at Tuesday, August 06, 2019